The Cost of Fuel

Fuel is one of the largest costs for the Road Freight Transport industry, accounting for around 25% of revenue for the industry as a whole. Fuel is a volatile input cost and the industry’s attempts to protect profit margins by passing on cost increases to customers in the past has had mixed results.

Over the next five years fuel costs are expected to continue to increase, albeit at a slower rate than the price spike in 2008/2009. This should allow larger players to continue to pass on much of the increase to their customers. Fuel and other costs can often be reduced by ensuring drivers follow planned routes, because even small increases in distance travelled can have a huge impact on profitability.

Vehicle monitoring technologies and route optimisation software can provide management with a greater level of control over vehicle-related direct costs. 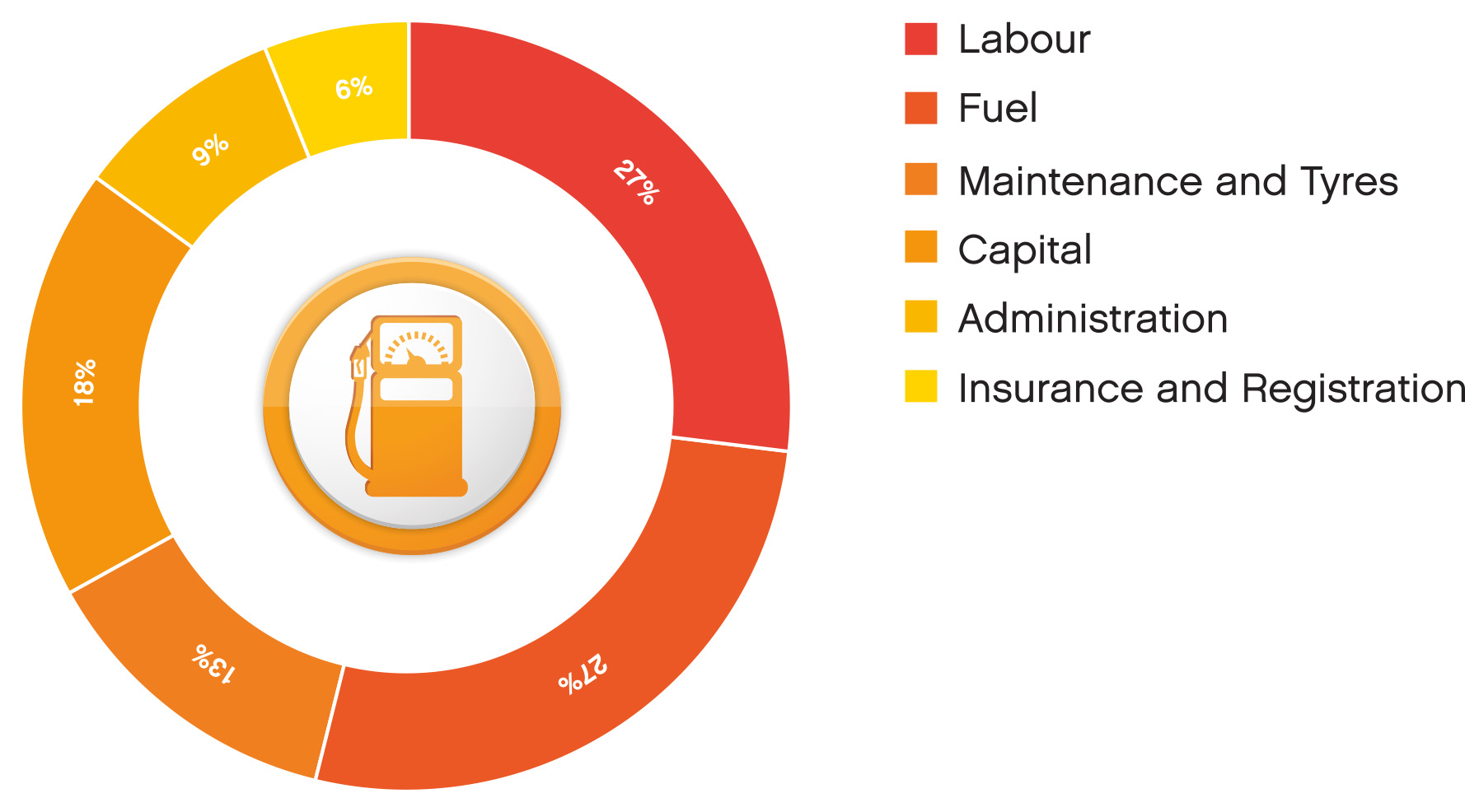 How Do Tyres Influence Fuel Consumption?

When an engine powers a vehicle forward, the tyres resist this movement. They resist this forward propulsion because they deflect under load through their rotation cycle and experience friction between the tread and the road surface

This resistance causes energy loss, as energy that could be used for forward propulsion is being used to overcome the deflection of the tyre’s shape and the friction between the tread and the road surface

For trucks in line haul operation, there is a near constant amount of engine power used to overcome rolling resistance. In simple terms, a portion of the engine power is being used to do nothing more than assist the tyres in rotating through their cycle.

Other factors affecting fuel efficiency, tyre longevity and the overall operation of the vehicle include:

Driving Style - The driving habits or style of the driver of a vehicle can have a significant influence on the amount of fuel consumed. Modern automated truck drivelines can reduce the impact of driving style on fuel economy, which places more of an emphasis on the need for fuel efficient tyres.

A reduction of 10% of rolling resistance on a complete vehicle results in approximately 3% reduced fuel consumption (approx. 0.9 litres/100km on a vehicle which consumers 30litres/100km).

Vehicle Configuration - On a typical 40 ton, 5 axle truck, each axle contributes to a portion of the total vehicle tyre rolling resistance. To minimise the vehicles fuel consumption, it is recommended to equip all axles with low rolling resistance fuel efficient tyres.

Low energy loss tyres are attained through advances in the following technologies.

A high silica content compound with a high degree of stiffness can lower rebound within the tread. This reduces energy loss and can help to lower rolling resistance without compromising tread wear or wet and dry braking performance.

Optimising the bead area and carcass geometry of the tyre lowers heat generation, which in turn aids in the minimisation of energy loss.

Save Money with Goodyear FUELMAX

In 2014, Goodyear Europe released a new range of FuelMax truck tyres. To establish the fuel economy performance of the new Goodyear FuelMax tyres versus the other offers available on the European market, Goodyear enlisted the services of TUV SUD, an independent testing organisation internationally renowned for its unbiased and accurate results.

The advantage of testing the fuel economy of tyres in a laboratory is that the typical factors that invalidate fuel economy comparisons are removed, such as variations in aerodynamic drag, weather, driving style and road terrain.

The calculations used to test the Goodyear FuelMax were based on a typical European five-axle 40 tonne truck and trailer combination, with an annual mileage of 150,000 kms, a fuel consumption of 34 litres/100 kms and a fuel price of 1.30 Euro (around $1.90 AUD).

The results showed that an annual saving would be achieved by using the latest Goodyear FUELMAX range combination, compared to the next best of the competitor tyres assessed.

In Australia many of the latest fuel saving technologies can be found in the locally marketed range, from the S100 FuelMax, the LHSII+ FuelMax & FuelMax S steer tyres, to the LHDII drive tyres, the LHT* & LHT II Fuelmax trailer tyres.

Whilst difficult to measure, the potential benefits of a fuel reduction strategy incorporating low rolling resistance tyres are considerable.

A special manufacturing technique allows a ‘hidden’ tread pattern to be moulded into the tyre.

As well as the unique tread design, optimised cavity shape gives a good balance of rolling resistance, mileage and handling performance. The frictional energy of the tread pattern has also been reduced so that the mileage is further improved. Wet grip is enhanced thanks to the edge blades and optimised blade angles, which further aid the low rolling resistance.

Thanks to this technology, the FuelMax S in size 385/55R22.5 is the first steer tyre offered by Goodyear to be awarded an EU tyre label A Grade in rolling resistance.